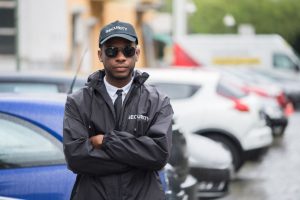 What are some common falsehoods about professional security guards?

First, there’s the idea that all security guards are armed with guns or other weapons. That’s false. Some have the training and certification (and legal ability) to carry guns or other weapons, and they’re known as armed guards. Others don’t, and they’re unarmed guards. Just because you see someone in a uniform with the word “security” on their clothing doesn’t necessarily mean they’re packing heat.

Another falsehood people tend to believe is that security guards aren’t trained or educated. If  they’re professional guards, they are. If they’re amateurs who are just wearing a shirt that says security, and they’re volunteering for their friends’ party, they probably aren’t trained or educated, at least when it comes to safety procedures and such. As for professional guards, they do receive classroom and real life training somewhat similar to that of police officers.

Are most guards “not good” with the public? No. While it’s true that a small percentage should be in another line of work and somehow “slip by” into the ranks, the majority of professional security guards are very good with interacting with the public in a professional manner. Guards need to be able to have positive interactions with people if they want to keep their jobs.

Do all guards need constant supervision? No. Many are able to be quite independent, trusted to do the right thing at all times even if and when they’re not being supervised by a superior.

Finally, there’s the falsehood that hiring professional security guards is “too expensive.” Well, that’s an assumption, but not reality. For instance, call and ask about pricing, and see if it fits your budget. You might be pleasantly surprised to learn that hiring guards is affordable.

« What Makes a Good Security Training Instructor?
Keep These Things in Mind When Choosing a Firearms Instructor »