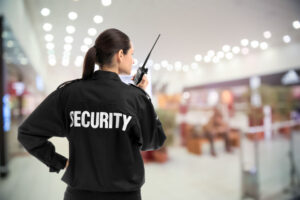 With the way people are acting these days, one wonders if security guards should wear a suit of full armor like the knights of the past who’d go into battle. After all, you never know what kind of things people will pull out of their pockets to harm people, from knives to guns and more. Furthermore, doesn’t it seem like people are angrier in general? It’s not easy being a security guard these days, but thankfully they have gear that helps them do their job.

What kind of gear should a security guard have?

There are numerous pieces of gear that can help a security guard do their job and be ready for all sorts of situations.

For starters, it’s good for guards to carry a flashlight, since they may have to peer into dark rooms or work at night. In some cases, the flashlight may end up being used for protection (as a striking device)! Guards should also consider carrying a baton, which is a weapon they can use to protect themselves. If a guard is expected to be armed (and trained to use weapons), they should carry a firearm on duty.

Security guards need to dress the part, which means they’re going to want to wear a good pair of durable black boots since they’re on their feet for long hours. They should also have a proper security guard belt which holds pieces of equipment like pepper spray. Speaking of pepper spray, it’s a good idea for guards to carry it on their person since it can be used to repress an attacker or someone breaking the law. For cold nights, it’s a good idea for guards to wear a heated vest. In some cases, guards might want to wear bulletproof vests, especially if they’re working in an area known for gunshots and crime.

Guards should carry cell phones which they can use to communicate with their superiors as well as authorities like the police or fire departments in town. Related to the phone is the digital camera to take pictures and videos– usually phones with cameras are “one in the same” these days.

Finally, a mini first aid kit can come in handy since things like band-aids may be needed in the line of duty.

If you’re looking for experience and security guard training certifications to help elevate your career, learn how Security Training Center can help.

« What Will Security Training Classes do For Your Career?