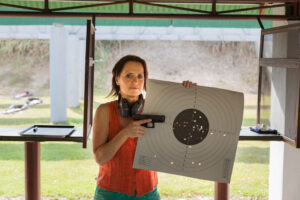 If you’re going to be a gun owner, you should be a responsible one. What does that mean?

A responsible gun owner takes courses on gun handling and safety so they know details about how to properly and safely deal with firearms. After all, guns have the power to injure or kill people– they shouldn’t be handled carelessly. The more a person knows about guns, the more responsible they can be. You wouldn’t give a loaded gun to someone who has no knowledge of how to use guns, right?

It’s important to know about gun safety laws. For instance, if a gun is unlocked and loaded, you should never put your finger on the trigger until it’s time to shoot. Otherwise, you could inadvertently discharge the firearm at “the wrong time” and ruin someone else’s life. Also, it’s important to keep a gun pointed in a safe direction. The safe position involves the barrel pointing to the ground. Also, when storing a gun, it should be stored straight up or down so it won’t easily hurt anyone if it accidentally discharges.

Have you ever heard this? “Treat every gun as if it’s loaded.” This way you’re as careful as can be, and that helps make you a responsible gun owner.

When you’re out shooting animals, for instance, it’s important to know what’s beyond your intended target. What if you shot a deer but the bullet also ended up killing a fellow hunter standing behind that deer?

There’s a lot to learn about guns if you’re going to be a responsible gun owner. In the Chicago area, you can take gun handling/safety courses at Security Training Center. Maybe you want to take a concealed carry class, or you want to become a security officer and need to take the certification class. Please call 773-445-4413 for more info, or check this link.